Kruja is a city and municipality in the north of central Albania. Located between Mount Kruja and the Ishëm River, the city is only 20 km north of Albania's capital, Tirana.

Kruja is one of the most important cities in Albania, mainly known as the birthplace of Gjergj Kastriota Skënderbeu, the greatest Albanian hero of all time. It is only an hour by car, or bus, from the capital Tirana, so you can easily visit it in one day.

Kruja was the capital of the first autonomous Albanian state in the 12th century. However not too long after the Ottoman conquests occupied almost the entire Balkan Peninsula. Two centuries later, the Albanians managed to defeat the Ottoman invaders and, in the 15th century, the beautiful castle of Kruja (now the Skanderbeg Museum) was erected.

The old center of Kruja is small. The old market street is amazing, kept in the old Ottoman style with beautiful architecture. If you are interested in antiques, it will be a haven for you. For a very reasonable price, you can buy many original, old and handmade tools and objects.

You can find several different souvenirs, made by hand, especially related to Albania, such as small bunkers!

Around the castle, the tower and the amazingly preserved walls integrate perfectly with the high, rocky mountains. Take a walk and admire the sights, much better than in the city! 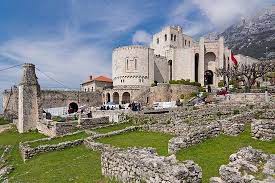